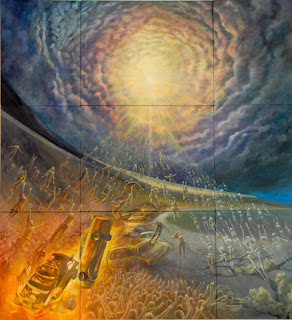 
Peter Seward's recent paintings depict his own biblical mythology and are a part of his inherited legacy of religious illustration. Seward grew up in Cleveland, Ohio, where Union Gospel Press has published the Gospel Herald for over a century. The work in this exhibition is by three generations of artists who contributed artwork to UGP: Walter J. Dittmar, 1879–1964, who was a follower of Jesus Christ and an art teacher; Peter's father, James E. Seward, born in 1926, is an ordained minister and still a painter and illustrator of biblical themes; and Peter Seward, agnostic, born in 1962.
When employed at the Union Gospel Press in the 1960s, Peter's father rescued about twenty of Dittmar's original illustrations from the garbage bin around the time of Dittmar's death and Peter's birth. The works date from 1907 to 1928. These works loomed large in Peter's imagination as a kid as they were "just around and out in our small house."

Six of Dittmar's wildly ambitious ink drawings and paintings are included in the exhibit. They are truly a labor of love going beyond the contractual work for hire. These artworks depict apocalyptic scenes commenting on the events of the artists' day: the Hindenburg, World War I, the Roaring Twenties. (Paradoxically, he was also a cover illustrator for many of the rag-based songs published by Vandersloot Music that were steeped in ethnic stereotypes of the times and depict racist caricatures.) Color blind, Dittmar's editorial cartoons are ink drawings with only one additional hue.

A print of James E. Seward's 2008 painting, "Peace! Be still!" depicts a story of Jesus calming the sea from the book of MARK, and hangs alongside Peter Seward's "Nascar Rapture" and "Tower of Babel."

"Nascar Rapture" is about the New Testament prophecy where Christians—living and dead—are whisked into the Heavens for everlasting life. The scene is placed at the Nascar Track where the unfortunates left behind suffer the flames of Hell-on-Earth, resulting from the crash of cars whose faithful drivers are among the "raptured," breaking the bonds of gravity into celestial light.

Seward's "Tower of Babel" is a biblical parable about man’s ambition to touch the heavens and the ruination by God of this architectural endeavor by creating different languages to thwart progress. This version of "Babel" juxtaposes the 19th-century world of Superintendent of the Adirondack Survey, Verplanck Colvin (1847–1920), with modern wireless communication infrastructure.