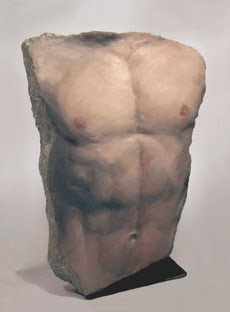 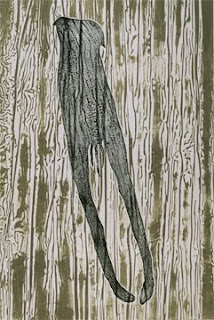 5th August 2010 thru the 28th August 2010
(meet the artists opening reception Thursday, August 5th from 6-8p)
The gift inherent in our world is imagination, imagination births art. Freed, it is the substantive element where a universe can reflect the wonder beyond absolutes, the awe beyond seeing and hearing and experience a depth (or insight or breath) for souls to dance with uncertainty embrace diversity and celebrate beauty as the stars behold. -Margo Fish

We celebrate the conjoining of musical performance and artistic representation.

SKIN n.: the external covering of a body, surface layer or outer covering. SKIN v. to remove or strip off.
The verb "skin" is almost implicit in the noun "skin".

Therefore, this title is used to question objective reality and to strip down to what lies beneath it's surface.

Each artists idea of SKIN results from a flow of ideas that has a physical and a metaphysical texture. How von Eicken-Kopperl and Challoner work out these ideas in physical terms is because each is drawn to certain methods, materials and metaphors to pose questions beyond the surface of their work.

Challoner covers flat granite fragments with nude forms by painting them in perspective shaped to the physical stone.

Helga von Eicken-Kopperl makes figurative skins based on a shadow, in paper, lead, gold leaf, and in a coda of jewelry - gold and silver.

Stone Paintings by Audrey Challoner: Movement: Softness + Stone
Since living in the New York artist community called DUMBO (Down Under the Manhattan Bridge Overpass) Audrey Challoner has been fascinated by the natural and subtle but amorphic shapes captured in stone, adopting a unique technique of painting on stone pieces as either found in nature or as found man-made fragments. Her earlier pieces were painted onto large granite slabs which spalled off the base of the anchorage of the Brooklyn side of the Brooklyn Bridge.

The image of soft flesh contrasting against the harsh surface of stone creates a play between the absolute essence of the human figure with the vagueness of the irregularity of the fragmented stone pieces. Together the effect is at once captivating and powerful. For Challoner, painting soft flesh onto this hard surface offers us a unique perspective of what the stone’s potential can be or even what the stone wants to be. As in ancient Greece and Rome, where painting on sculpted figures softened the harshness of the surrounding landscape making the marriage of nature and the manmade accessible, Challoner’s art dares to impose that touch of human softness on an otherwise harsh reality.

"Rocks speak to Audrey Challoner and reveal themselves, reluctantly, as nudes. Polished granite denies the curves of flesh, ragged outlines define their own obdurate space, and the plane of stone resists the torso’s muscular twist, but in the end the painting overwhelms the rock and takes possession of it."
-Wyatt MacGaffey

SKINS by Helga von Eicken-Kopperl: Based on a Shadow and the Alchemical Desire to
Turn Lead Into Gold.

THE BIRTHPLACE OF THE SHADOW
“While looking for a universal and perhaps comforting image that embodies the present state of
human kind, I found this ambiguous shadow. It appeared after I hung an incomplete sculpture of a woman with a hand stored between her legs on the studio wall. The afternoon sun cast its
powerful shadow as an elongated puzzle. Was it, according to Stuart Nicholson of Cover Magazine, “nature's projectile or a solo being hanging out in a strange biosphere”? Critic Mayer Shapiro called this form “a metaphor of spirit without sexuality or identity...subject to gravity, in an eventual attraction to the the unspiritual earth”.

“Experimenting with different substances I was able to examine its intriguing nature and test the
limitations of the materials, lead, silk and paper. As I played with density, structure and
transparency, I became intimate with the headless, armless “shadow”, (Jung's signifier of the
instinctive, the irrational), in three installations - THE SCARLET RETREAT, LEAD TREE
PEOPLE and with a series of prints, ROMAN COLLOGRAPHS ”. The end of this alchemical trail
begins a new abstract series. MEASURE OF GOLD, 48” x 68”. Pinched,pleated and gilded waxed
paper, maps expanses and limitations of physical and spiritual resources.

Helga von Eicken-Kopperl lives in New York City. She has a long history of material driven
installations since 1993. They were made to engage the inner life - a place of private thought :
Andrew Purchuck Assistant Director for Contemporary Projects and Research Projects for the
Getty Museum, describes them as “a refuge,....a dreamscape where words are lost and
environment takes over”.

The artist employs stiffened silk, lead, light and original scores in her installations. In addition she makes sculpture , painting, fusion art, prints, soundscapes and designs singular jewelry for her clients. She graduated with a BFA in Theatre from Carnegie Mellon in 1973, studied art in New York at Parsons, Pratt, and MOMA. Helga is in the collections of MOMA, The Museo Zoologico in Rome and The Fusion Arts Museum in New York City. Her work has been shown and collected in The United States, Europe and as far afield as India and Russia. During her sojourn as a visiting artist at the American Academy In Rome, she pulled the Collographs in this current show, with Roman master printer Luciano Trina. One is in the permanent collection of MOMA. With grateful acknowledgment, she was born into a family of artists, Her father's cousin, Hill von Rebay the director of Solomon Guggenheim's Foundation was responsible for a large part of the Museum's collection. Her aunt, sculptor Gisela von Eicken - Lamprecht is in the collections of three main Montreal Museums. Her sister shows at the New York Museum of Arts and Design.

SYMBIOSIS
Where do Challoner-Desgardins and von-Eicken Kopperl's concerns coincide? Their work exists in an ambiguity of time and space while incorporating human forms into natural material; Both question the nature of perception, taking a minimalist approach to their materials; The two revel in classical art with a modernist approach, sharing both sensual and conceptual techniques.

LEAD TREE PEOPLE: ARTIST'S STATEMENT
This single smallest 5' figure is from a family of 22 rolled lead giants 8 to 9 feet tall. It comes from

LEAD TREE PEOPLE, an installation dedicated to the “old growth” spirits of the forest. Early in our history, in an attempt to understand a frightening world, imagination served nature. The natural world teemed with spirits: forces to be appeased or worshipped or as in the present day controlled by industry. Now,through ignorance and greed, these primary forests and their environments are disappearing. But the forest is a real and mythic space in which to negotiate the future; to see not only things as they are, but as they might become; to open ourselves again to inanimate objects, alive in the world, their
shadows dancing.

LEAD TREE PEOPLE: AN ESSAY
“I'm inspired by their looming yet curiously comforting presences. They flaunt their wear as a type of earned plushness . The lines and wrinkles running down them seem the record of streams of intensity, currents of pleasure still coursing down and over them like so many ripples in a stream... They are shapes of a reunion of spirit and flesh, shapes in which Lear's “forked animal” and “the body electric” of which Whitman sang , are astonishingly, yet with a strong, strange familiarity, made one and the same”.
- An essay by Fred Pfeil 1949-2005 (Critic/Writer, Colorado State University, Trinity College, CT. “Another Tale to Tell: Politics and Narrative in Post modern culture”. “What they tell you to forget”).

LEAD TREE PEOPLE: A REVIEW
“Kopperl physically renders these fluid forms that seem once molten, by shaping a10 x 4 foot sheet of lead over a carefully constructed and concealed copper armature. The flat landscape of the lead sheet is worked into cascading ridges and valleys reflecting the artists hand and a history of transformation. Are we looking at an apparition, a wisdom tooth, a curving tree trunk or simply a shadow rendered in lead. Through reworking her basic inspiration, Kopperl presents a collection of figures that elicit endless interpretations” - Tracey Hummer (Sculpture Magazine).

LEAD TREE PEOPLE: A REVIEW
Donahue/SosinskiArt, New York City
“Covering the walls of the gallery, von Eicken-Kopperl repeats her non static images, in a kind of
improvisation, times twenty two. This meditative rhythm, evokes a biomorphic collective such as in the works of Magdelena Abramowicz. The torsos resemble antique statuary, with a sublime heroism, intimating wisdom and commanding respect, their passage through time etched on their figures...”
- Stuart Nicholson (Editor, Cover Magazine, NY).

ROMAN COLLOGRAPHS: ARTIST'S STATEMENT
In Rome prior to my New York show of LEAD TREE PEOPLE I meet master printer Luciano Trina. He speaks no English but somehow we manage to make prints in the morning. I bring wheat colored scraps torn from “Viaggi e Sapori”. “Maybe we'll do backgrounds like this only 'piu grigio'”. I make a series of collographs with cardboard and gauze mimicking the texture of my long lead figures, The surfaces look similar, but more delicate, like rivers. We make a limited edition, eight images of five. They make me homesick for metal so we press a sheet of copper to make a background for the form that has followed for five years.

SUBTRACTION/ADDITION: JEWELRY ARTISTS STATEMENT
The European alchemists attempted to transform lead into gold in search for physical and
spiritual gain. Making jewelry opens one to transformation, with the kind of focus and
concentration necessary to see each drop of wax making a larger whole. Then to let the wax form
melt away and to fill that empty space with precious metal; a molded decorative skin.

SUBTRACTION/ADDITION: JEWELRY
“As a collector, the results of Ms. von Eicken Kopperl's lost wax technique speaks to me: raw, creative, substantial. The heft of the metal looks medieval yet the design is contemporary and timeless. I won't tire of this. Organic shapes pair with detailed stylization, as in the cell-like structures of a honey comb. Yet instead of identical hexagons she brings free form holes, to her intricate webs of gold and silver. As I try on her gold necklace it fits lightly without restraint, which is the craft of Kopperl's visionary
collection”. - Meghan Henke (Collector)

MEASURE OF GOLD: ARTIST'S STATEMENT
In reaching the end and on the threshold of a new alchemical search for transformation, a pinched and gilded Japanese waxed paper skin is mounted over crushed silk and foil. This large work uses the last existing Masa waxed paper made by a Japanese master whose technique died with him. The end of the paper supply and the rich gold leaf surface represents the waxing and waning of our physical and metaphysical resources.