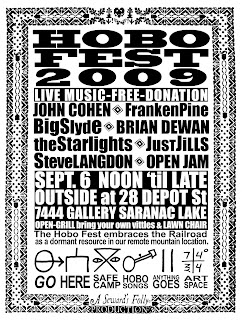 HOBO FEST
HoboFest2009 is an all-day free music event with the themes of railroads, the hobo-lifestyle, and economic depressions.

Sunday, September 6th, Hobofest starts with the arrival of the first train in Saranac Lake at 11:45am. Organized by Seward's Folly Productions and hosted by 7444 Gallery at 28 Depot Street, Hobofest will continue well into the evening. An open-grill will be available for those who bring their own "vittles." Please also bring lawn chairs or blankets for lounging while listening to a line up of music.

John Cohen's photographs are in major museum collections and his award-winning films, including "High Lonesome Sound" (1962), have been shown on PBS and BBC and at festivals worldwide. His trio, New Lost City Ramblers, has received several Grammy nominations. His music and field recordings have shaped the old time fiddle music revival and influenced many musicians including Bob Dylan, Jerry Garcia, and Ry Cooder. The Grateful Dead song "Uncle John's Band" on the Workingman's Dead album was a tribute to Cohen and his band. Recent coverage of 'The New Lost City Ramblers' log on to:
www-cdn.npr.org/templates/story/story.php?storyId=111971414

Brian Dewan now lives in the town of Catskill. His talents are wildly diverse and include music from the "forgotten corners of history," home-made analog synthesizers, filmstrips, illustration, and sculpture. He has created original music for Blue-Man-Group, and Sesame Street, appeared on the Tonight Show, and painted album-cover art for David Byrne.

"The idea of HoboFest was born when I heard Saranac Lake's Danny Ryan read his story about attending the National Hobo Convention in Iowa," says organizer Peter Seward. Danny will present an updated version at Hobofest. While not a Hobo himself, Danny does not own a car and journeys out of the region hitchhiking with his "not a weirdo" sign.

HoboFest embraces the railroad as a dormant resource in our remote mountain location. While the Scenic Railroad services mostly out-of-towners visiting Lake Placid, Hobofest hopes to attract the local population of Saranac Lake to the train and the area around Depot Street. We also hope to establish an event that is truly a grassroots effort, with community cooperation, and not much overhead. Performers play for free and admission is free.