kelly gorham | THE STONES HAVE MEMORIES 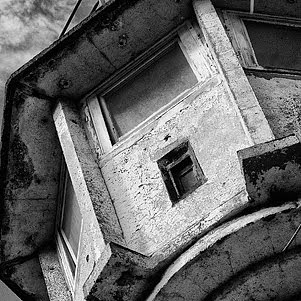 Join us on the 20th anniversary of this historic occasion as we explore Berlins cold war landmarks and their stories that impacted the world.
Kelly Gorham
"The Stones Have Memories"
Throughout his life, photographer Kelly Gorham has been intrigued by scenes commonly depicted in spy movies - the secret note exchanged unobtrusively beneath a coffee cup in a crowded restaurant, the daring prisoner exchange on a dark bridge, the elaborate signals that families developed to communicate with their loved ones living on the other side of the Berlin Wall during the Cold War.

To Gorham, the Cold War was also synonymous with the city of Berlin. So it should come as no surprise that the large photography project to which he has recently devoted his time addresses precisely that era in that place.

"The Stones Have Memories" exhibition includes 8 of Gorham's black and white images, 30" x 40", archival prints. The documentary photography project is a result of a visit Gorham made last fall to Berlin so that he could visually document the city's Cold War landmarks.

"The challenge that I set for myself was to try to capture history by photographing something in the present, and also to try to convey emotion through things that aren't human," he said.

Gorham travel's to Saranac Lake in upstate New York for the opening of an exhibit featuring eight of his photographs at 7444 Gallery, a gallery owned by MSU alumnus Todd Smith. The Nov. 9 opening coincides with the 20th anniversary of the fall of the Berlin Wall.

The events are the culmination of years of work, as well as a product of Gorham's interest in the Cold War. He said that interest dates back not only to the spy movies he has long been fond of watching, but also to his father.

"My dad served in the Army from 1959-1962 in France," Gorham explained. "He was with a unit responsible for the reconstruction of damage caused during World War II. He showed slides all the time and talked about the damage."

As a kid, Gorham, now 37, would also see news reports about East Germans defecting, and he remembers his dad talking about the Berlin Wall with distaste.

"It sounded like he had such a disgust for it that it made me curious," Gorham said. "As a kid, it was so hard to wrap my head around it."

Though the Cold War was always intriguing to Gorham, he didn't decide how he would turn that interest into a photography project until more recently.

Gorham grew up in Missoula and received a degree in photography from Montana State University in 1995. He worked as a staff photographer at three newspapers and as a corporate photographer in Seattle before joining the MSU News Service as staff photographer in 2007. He has also worked as a freelance journalist for nearly 20 years, with his images appearing in such publications as the New York Times, Sports Illustrated, Forbes Life and Skiing Magazine.

Four years ago, Gorham was planning a project that he termed a "visual spy novel," in which he would photograph "cloak and dagger" scenes - the kind that would seem to fit in with James Bond movies. But the idea quickly morphed into a documentary photography project on the Cold War instead, and Gorham was convinced he needed to travel to Berlin in order to do it. He spent the next several years doing research on the Cold War during his free time. He also spent several months coming up with a list of landmarks he knew he needed to visit in the city and working with an expert on Berlin history to make sure he could get to those places.

"They were really long days, and I didn't get everything I wanted," Gorham said. "I felt really insignificant. I felt like there was no way that I, as an outside observer, could document what someone else would have gone through."

But when Gorham returned and started editing his photos, he found that they did tell a complete story.

Gorham's friend and former professor Dan Wise, who is an instructor at MSU, helped Gorham critique the photos and decide which ones to include in the exhibit.

The remarkable thing about Gorham's project, Wise said, is that it bridges the gap between documentary photography and fine art photography.

"The photos meet fine art criteria of composition and aesthetics very well, but they also document a piece of history," Wise said. "If you're documenting a place, you want to capture a sense of feeling about that place. I think he's done that incredibly well. We don't have to be there (in Berlin) to feel what those photographs represent."

"I was really moved by it," Wise added. "As a group of photographs, it's very powerful."

Gorham cautions, though, that the 43 black and white photos he selected are not necessarily fun to view.

"One person described the project as being hit in the head with the butt of an AK-47 assault rifle," Gorham said. "These aren't some of the happiest pictures I've made."

Gorham thinks it's important to remember the landmarks of a city where so much of the Cold War was acted out, particularly since it has been nearly 20 years since the Berlin Wall fell.

"A lot of people have done projects about the Berlin Wall, the history of Berlin or the Cold War in Berlin," Gorham said. "But nobody that I can tell has gone to photograph the actual places there."

"I hope that we can learn from history," Gorham added. "There are so many lessons from the Cold War."

The images that comprise Gorham's exhibit in Saranac Lake have been made into 30-inch by 40-inch prints. He chose to make chromogenic prints on paper that has a silver emulsion layer because of the metallic look it provides.

"I wanted a material that would showcase texture in these images, because texture was a central guiding element in my creation and editing of the images," Gorham said.

"It almost feels like you can reach in to the photo and touch it," he added. "It's very powerful."

While he is in Saranac Lake for the opening, Gorham will also speak about the Cold War with groups of schoolchildren who will be on field trips to the gallery.

"I like the idea of outreach with kids who weren't even born when the (Berlin) Wall came down," Gorham said.

Ultimately, Gorham hopes to simply inspire thought with "The Stones Have Memories" and help people become better informed about the history of the Cold War.

"I'm not trying to make a comment with this project about 'capitalism good, communism bad,'" Gorham said. "I'm not making a judgment. I'm just trying to document history."

"I feel like I've got to let the actual events communicate the lessons of the Cold War, rather than making editorial choices that do."

More info on the artist and show here:

7444 Gallery is now taking applications from venues that may like to house this show in 2010.

Artist Kelly Gorham will be present for the opening reception and available for a book signing also complete sets of the prints in the show avail for purchase.