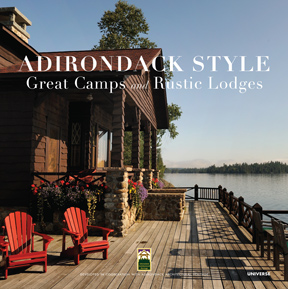 13th August 2011 thru the 6th October 2011
('Meet the Artists' opening reception Saturday, August 13th from 5p)
ADIRONDACK STYLE
Great Camps and Rustic Lodges
works by f-Stop Fitzgerald and Richard McCaffrey
In association with Adirondack Architectural Heritage
Introduction by Dr. Howard Kirschenbaum
Foreword by Laura S. Rice, The Adirondack Museum
Text by Lynn Woods and Jane Mackintosh
ADIRONDACK STYLE is the definitive book on the architecture, design, and natural beauty of the Adirondack Great and Rustic Camps. The structures of these camps made brilliant use of the rustic materials readily available in the area—rough-hewn log exteriors contrast with the lavish and elegant interiors, featuring intricate stonework and hand-carved furniture. Natural elements such as tree roots, twigs, and bark often played an integral part in the décor, and the simple yet elegant Adirondack chair has become an international symbol of leisure. Many camps had boathouses, teahouses, game rooms, and even bowling alleys, and several were designed by top architects of the era and incorporated their international influences: Pine Knot resembled a Swiss chalet; the architectural flourishes of Santanoni were Japanese-inspired; and The Hedges had Dutch doors.
Approximately forty of these extravagant camps survive, including ten that are National Historic Landmarks. ADIRONDACK STYLE features thirty-seven of these camps, including Pine Knot, Uncas, and Sagamore, all of which were built for William West Durant, a pioneer of the Great Camp style; Wonundra, which was built for William Avery Rockefeller and his family; and White Pine, which President Calvin Coolidge once used as his Summer White House. These grand structures have maintained the greatness of their past and enhance the natural beauty of the region. With breathtaking photography of the Great Camps and their surroundings, ADIRONDACK STYLE is a celebration of these regional treasures.
ABOUT THE PHOTOGRAPHERS:
f-Stop Fitzgerald is a noted photographer whose work has appeared in more than 100 periodicals, including Rolling Stone, GQ, Publishers Weekly, and The Village Voice. His collaboration with Stephen King, Nightmares in the Sky, was a national best seller.
Richard McCaffrey is currently staff photographer for The Providence Phoenix. He is represented by Getty Images and his work appears in numerous national and international books and publications. 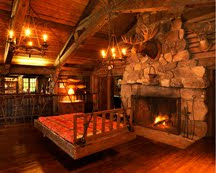