A holiday collection of artists past and future. Featuring a variety of new, unique, affordable, contemporary artistic items available in limited quantities and exclusively through the 7444 Gallery.
The 7444 Collective
"various artists" 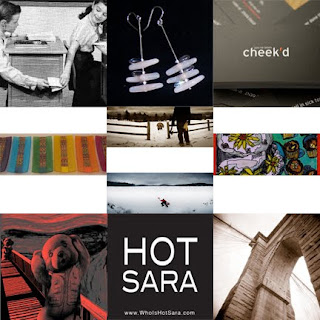 AARON HOBSON has had solo exhibits in NYC, Los Angeles and London, and has a growing list of collectors and awards from around the world. Articles and reviews of his work have appeared in over 15 languages in over 24 countries from every major continent, except the one covered in ice. His work has been featured in the 2008 photo issue of Juxtapoz Magazine, DPWORLD (China '08), Urban Salir Magazine (Spain '09), Digifoto (Czech '10), and EYEmazing (Belgium '10).

Cinemascapes are a hybrid between autobiography and fiction, with Hobson himself always in the star role. They are at times, haunting and scandalous, other times inspiring, but always come across as closely personal. Reflective of his 30 years of experiences, emotions, and challenges throughout his life, Hobson creates images that not only viscerally and visually grab the conscious mind, but also linger in the viewer's imagination and memory.

PROJECT: Two holiday postcards featuring panoramic narratives that one would expect from the cinemascapist (Aaron Hobson). "Shop 'til you drop" features an exhausted pajama clad xmas shopper (and gifts) sprawled out on snow covered Lake Colby and the postcard "turkey time" shows the lower half of an axe-wielding fella being approached by a wild turkey at the scenic first hole of the Lake Placid Golf Club.

PROJECT: Whether it’s in a bar, at the gym or at the dog park, Cheek’d users can express their interest in someone by coyly handing them a small black card that contains a cheeky phrase such as “act natural. we can get awkward later.” or “i just put all my drinks on your tab.” The recipient is invited to go online to check out your profile and decide whether he or she would like to make contact with you through the Cheek’d internal messaging service (personal information and privacy are protected).

AMY CODDINGTON-BURNETT finds humor in most things. I am interested in trash; I stalk the streets on trash days. The old adage, “One mans’ trash is another mans’ treasure”, is my life motto. I like to attempt to transform utilitarian items into my kind of art; whimsical, sardonic, and me.

JESSICA JEFFERY graduated with a BFA in Printmaking from the Maine College of Art in 2008 and shortly after moved back to Saranac Lake. You can check out more of her work at The Fringe Artist Studio and Gallery, which she and her partner, Eric Ackerson, established in May 2010.

Bits and pieces have always fascinated me. I have worked this way in several mediums including silkscreen, woodblock, and paper cutouts. The process of rearranging them, collecting, editing and omitting pieces in order to create new compositions is quite possibly infinite. I have been searching for a medium that would allow for that infinity to happen and allow people to participate in the composition process. Voila! Magnets! Enjoy playing!

ELAINE BROWN. I find myself living in Lake Placid, NY and happy about that. My husband and I moved here when we became empty-nesters. Now our nest is set up for a relaxed life and visits from friends and, somehow not often enough, our daughters.

When I first found myself with some time to work with clay it was as a luxury I took for myself. It became a way for me to express myself creatively. After a career as a banker and then mother and homemaker, it was a new found outlet. I had lots of fun times at home with my girls. When they got older I spent countless hours volunteering in all sorts of ways. I would sneak away for half a day here and there and create some objects in clay and often enough I would be happy with the results.

People always ask me what I do and I generally answer with some generalities and say that I do some pottery. I would like to transition into "I am a potter".

RICHARD PARRISH maintains a studio for kiln formed glass and architecture in Bozeman, Montana. He holds a Master of Architecture degree from the Cranbrook Academy of Art in Bloomfield Hills, Michigan and a Bachelor of Architecture degree from the University of Idaho in Moscow, Idaho. He was awarded best artist in his category at the Western Design Conference Exhibition in 2008. His work was selected for the Corning Museum of Glass’s New Glass Review 27, and he was awarded the American Craft Council Award of Achievement in 2003. His artwork is in numerous public and private collections in the United States and Europe.

Richard has taught architecture and design at The University of Michigan and Montana State University. He teaches classes in kilnformed glass in his studio and throughout the United States, focusing on the visual elements of design; color theory; and inspiration, meaning and intent.

As an artist & an architect, I find inspiration in both the human-made environment & in the vast landscape of the American west where I grew up. I am fascinated by the juxtaposition of the constructed & the natural, which I often express in my work. I find that it is critical to my existence to make things with my hands, using real materials. I focus on the integration of meaning, design and technique in my glasswork and in the classes that I teach. I am particularly interested in the interaction of light and color in the environment and in my own work.

PETER SEWARD exhibits in New York State, as well as Connecticut, Albuquerque and most recently Vermont (Big Town Gallery in Rochester). With the opening this year of the "Upstairs Gallery" in downtown Saranac Lake, Seward now has a regular venue to display his paintings and projects.

Seward's subject's explore the human footprint in the natural environment, and the man-made attempt to integrate through the manufacture of organic form.

API DESIGN presents 'HOT SARA'. An urban legend in Saranac Lake returns again to realize the transformation of her place is at the top of its game. Api design introduces a support campaign in the realization mind of a sense of place. The branding of this campaign will be launched Thursday with explicit and detailed interactive information on www.WhoIshHotSara.com. From any point in Saranac Lake, HOT SARA, is present and watching over us. Through our support we will identify and record the greatness that abounds our sustainable community. Our rewards will be seen through stories and pictures sheading a positive light on the many efforts that are underway to sustain and progress into the future.

MARK KURTZ: has been providing Saranac Lake, Lake Placid and the Adirondack region with outstanding fine art, commercial and wedding photography for over 20 years. Mark's gallery of fine art black and white photography, located in downtown Saranac Lake, boasts hundreds of hand-made prints and also serves as basecamp for his commercial and wedding photography services. He recieved a BFA from Alfred University and has taught photography in high school, college and workshop environments. Mark is one of the founding members of the Adirondack Artist's Guild, and is widely recognized as one of the Adirondack region's preeminent artists.
Mark did his first darkroom work in the 8th grade and immediately fell in love with the photographic process. He continued his study of the craft through high school and college. Since then, Mark's work has been published in countless publications over the past 20 years. He is a regular contributing photographer to Adirondack Life magazine and his work has been featured in Skiing magazine, not to mention countless stunning advertisements and annual reports for regional and national clients alike.

While Mark's current commercial work is most often in the 21st Century digital format, his black and white fine art photography remains steadfastly film- and darkroom-based. For over 15 years Mark has journeyed through the Adirondacks, along the coast of Maine, into the desert southwest and beyond with the panoramic camera, and therefore the wide-format landscape is most frequently his medium of choice. However, recent explorations into the unique sensibilities of the Holga camera have only added to Mark's already evocative body of work.

The Mark Kurtz studio on main street celebrates its 10 years in business in the coming year begining this month with events and shows.

Project: Limited Edition Holga Dossier
JAMIE DYER grew up in Northern Maine and moved to NY to attend St. Lawrence University. Following graduation, she moved to the Adirondacks - a place she fell in love with while a student. Jamie spends her time working at The Wild Center, enjoying the ADK outdoors, and traveling.

Jewelry is form of personal expression. And, for Jamie specifically, an outlet for creativity and relaxation. The broad, lock-step style of creating a series of pieces is soothing, and inspires Jamie to branch out and alter the model.

Project: With the "pick your piece, pick your pouch" line, Jamie hopes to share the creative spirit with the admirers of her art. Various pouches and two contrasting lines of jewelry provide the opportunity to mix and match based on personal preference. Because, why shouldn't you decide how your art is packaged?

All items = guaranteed for life.