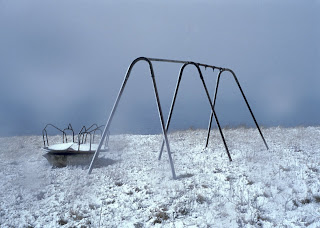 6th May 2010 thru the 29th May 2010
(meet the artist opening reception Thursday, May 6th from 6-8p)
Reflections of Abandonment
Abandonment does not equal abandoned (i.e. I was abandoned).

Abandonment = relinquishment - of an interest, claim, privilege, possession or right, especially with the intent of never again resuming or reasserting it (i.e. After something is lost/taken, I embody; Reflections of Abandonment).

The tangible value of ‘lost’ is offset by the remembrance of something lost rather than the loss itself. The cause of the loss is a collective establishment of barriers in resistance to a particular typology of growth, one that included an original foundation and demanded constant recreation not re-creation. This is our new [re]creation. We have abandoned structures deemed unsafe and not accommodated their underlying values into the structure of our re-creation. Thus, never allowing us to build as an individual with past. The re-creation is too fast for usto (see note) follow. When realization catches us, we again quickly face re-creation in fear of what we have created. We stand as the last generation who built self on the foundation of recreation, without the fear of being abandoned but with the ability to reflect abandonment and [re]create it in the future. The new playground reflects the way that we remove things that carry value and do not replace them with an equal. All elements of functional simplicity have been analyzed and removed for a more sterile, unrealistic, dispensable palette. Creativity handed not created.

Word creation:
Us to (join as in to)
Usto (Into)