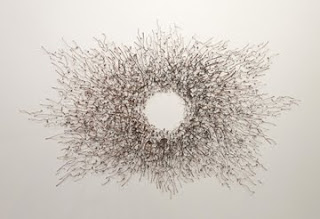 'I have long been inspired by the drawn mark…line weight, swiftness and deliberate execution.'

I am captivated by the energized line naturally found in the strength and determination of the vine tendril as seen melding in a forested cluster or clinging to urban brick. I experience the individual tendrils as if evoking a written language within nature, visually reminiscent of the vertical, dripping gestures of Fujiwara Sukamasa, the tenth century Japanese calligrapher.

In my work I use the vine tendril as my drawing tool, as my mark. The twisting, gripping forms transform into a 3-dimensional line and interplay with surface shadow. Simultaneously my intent is to present a deception of perception, as when surfaces reveal to be other than they appear. In my work I alter the appearance of the vine tendril’s thin bark with burnishing techniques such as steel wool and coatings of clear shellac, creating a mark that appears to be fabricated; mechanically twisted, metalized, and disassociated from its natural intent. The assemblages and surface papers evoke a perceived interpretation while at the same time provoking a realization of the naturalness of the vine tendril. I want to present the viewer with a conscience moment of that realization.

My pencil and graphite drawings explore individual tendrils as statements of tension, power and fluidity.

Russell's studio is located in Glens Falls, NY at the historic Shirt Factory, a collective of artists studios, shoppes and galleries.