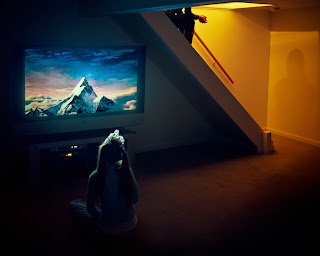 THE ULTRA MAJESTIC MOUNTAIN, WYOMISSING, PA
Archival Pigment Print
Edition of 15
32”x40”
2009
“The Ultra Majestic Mountain” is the title of the most recent iteration of the Paramount Pictures logo. Birthed from the mind of an illustrator, the infamous Paramount Mountain does not actually exist in real life. However, if asked to describe a mountain visually, most might appropriate the aesthetics of this logo as a basis for their depiction.

The Paramount Pictures logo has embedded itself in the American visual lexicon. So much so, that its non-existence often escapes us. Consequently, it has transformed our expectations of what a real mountain can/or should be.

The Ultra Majestic Mountain, Wyomissing, PA is a direct allusion to the allegory of Plato’s Cave. Socratic thought suggests that if a man is only exposed to projections of reality (shadows), then when exposed to actual reality he would believe he was gazing upon an untruth. For him, the shadows have become his reality.

ARTIST STATEMENT:
I am fascinated with the way we represent the natural world by preparing it for display and visual consumption. Decided manipulations like selective preservation and engineered wilderness, act as a lens to explore ideas of mediated experience, perpetuated aesthetics, and transformative hyper-reality. This series is a catalogue of the varied ways we go about [re] contextualizing the “natural world,” and thus, redefining the way we perceive it.
ARTIST INFO Kyle Ford
www.kylefordphotography.com