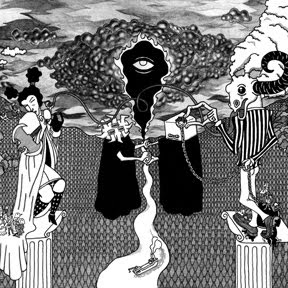 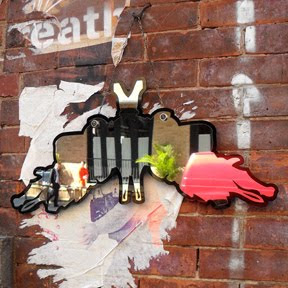 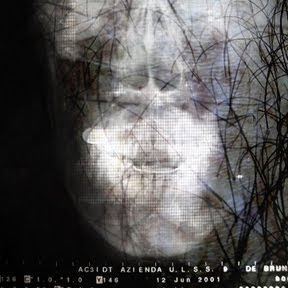 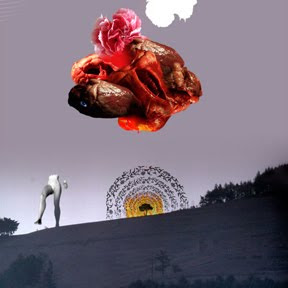 3rd June 2010 thru the 26th June 2010
(meet the artist opening reception Thursday, June 3rd from 6-8p)
In the year 2010 SCTY issues forth broken bits together to aid in healing. The alchemical exsanguination, Choice Splints, explores the trappings and travails of the creative process for this consortium. A fecund mass of fiction and artifice evoking a greater truth. Unveiled wickedness dripping with delight. A chance happening in an art gallery—as imagined by the doom of forgotten lore. Here product and consumption becomes less vital than process and creation.

Joshua Ray
Joshua Ray Stephens was raised by fluffy gray kittens; he found it a shock to learn that this was an abnormal family environment. Upon completing his degree in Graphic Design at the University of Georgia he flew that very same day to Italy to begin a one year stint at Fabrica. Two years later he was inculcated into a secret organisation whose true name may not be uttered, due to legal matters beyond our control, but often introduces itself as the Society for the Advancement of the Graphic Arts. He now resides in the Bloody Hook underneath the Spotted R. He spends his time in an old warehouse concocting sacred and magick icons.

Ryan Hobbs
Hobbs is a designer, artist and entrepreneur. His work focuses on the nature of obsolete forms and the obsolesce of communication. Upon completing his degree in Graphic Design at Montana State University, he left for the hallowed grounds of Cranbrook to receive his first MFA in Design, followed by a Fulbright in Riga, Latvia. After a short stay in the Big Apple, he left for New Zealand where, in 2009, he finished his second MFA in photography. He exhibits in Latvia, New Zealand and New York. He calls Bank Street home, although at the moment he is under country arrest in New Zealand.

Ali Madad
Ali Madad is a designer, writer, educator and hierophant. His work focuses on the both the theoretical and public role design plays within culture and public space; situated in the liminal space of commercial design and private art. Ali was the first graduate in, the then nascent, New Media Design program at Rochester Institute of Technology and subsequently earned his MFA in 2D Design from Cranbrook Academy of Art. He is a Visiting Associate Professor at Pratt Institute and a Visiting Artist at Cooper Union.

Beloved SCTY, what I most like in you is your unsparing quality.
- André Breton